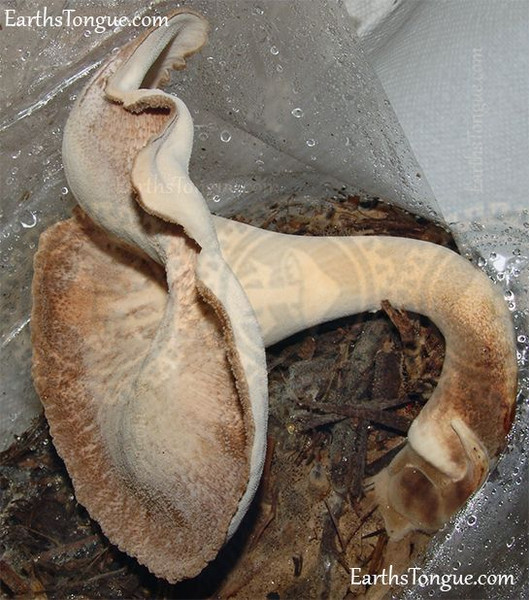 Fruit bodies of Polyporus tuberaster grow from an underground sclerotium-like structure, which look like balls or stones. They which may enclose foreign material such as dirt, rocks, portions of roots, and wood. P. Tuberaster is usually found in the wild occurring on both broad-leaved and coniferous trees.

Sclerotium normally present in the ground, round to oval or irregular, heavy, up to 15 kg, but normally far less than that, fleshy and tough when fresh, shrinking considerably on drying and becoming hard and brittle, surface ochraceous to dark dirty brown, densely mixed with sand, stones and roots, often in considerable quantities so that it looks like soill that has been penetrated by mycelial strands and white aggregations of hyphae. (Nuñez M 1995)

On hardwoods or on the ground from a blackish sclerotium. When growing on wood, there is often a connection through the wood to an underground sclerotium.

The Tubers form on the surface looking like balls or rocks eventually forming into antlers usually dark brown and fuzzy with a lighter colored tip. This antler slowly widens and grows taller. From the tip of the antler grows a large thick cap that has a furry and soft scaly surface brownish red and light brown in color. The shape of the cap is convex and funnel shaped and can grow up to a foot wide.

The underside of the cap has small pores instead of gills where the spores are released from alike other polypores.
This species has been preciously classified under the following:

P. Tuberaster can grow in controlled environments including bags without the use of the start up sclerotia and sandy soil mixture as most companies now a days sell it (although very few due to difficulty to produce the sclerotia) due to Fungi Perfecti selling it this way a while back. The old way of growing it is by burying the sclerotium in a pan with moist sandy soil. The sclerotium with contact of this moist mix eventually produces the "tubers" out of itself and the mushroom can then be harvested that way. The sclerotium ball itself is not edible due to the fact that it contains foreign materials in itself.

We are selling the same culture that produced the mushrooms you see in the images.