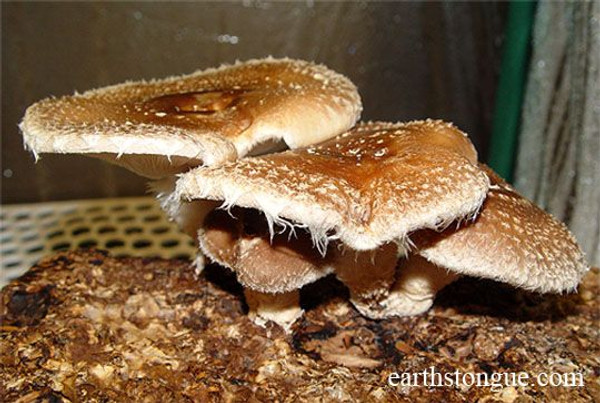 As well as being a source of B vitamins, minerals and proteins, Shiitake is attributed with many health enhancing properties including lowering blood cholesterol, immune system stimulation and anti-tumour activity.

Shiitake Mushrooms contain all eight amino acids that are ideal for human nutrition, two of which are leucine and lysine, and B vitamins, including B12. Scientists have isolated substances from Shiitake which may play a role in the cure and prevention of heart disease, cancer, and AIDS. It exhibits strong immune responses and has been extensively studied for use with cancers and viral infections. Shiitake Mushrooms contain a polysaccharide called "lentinan" that has proven to stop or slow the growth of cancerous tumors in animals.
Another component, activated hexose-containing compound, is also said to reduce tumor activity and lessen the side effects of cancer treatment. The mushrooms also contain the compound eritadenine, which is thought to lower cholesterol by blocking the way cholesterol is absorbed into the bloodstream.

This mushroom contains a variety of constituents that have demonstrated many actions including anti-tumor, liver protecting, anti-viral, immune modulation, and blood pressure lowering. Its extract is a powerful anti-fungal agent, used effectively to treat candida albicans. It is thought that lentinan enhances the immune system's ability to fight infection. It is one of the three mushroom-based anti-cancer drugs approved by the FDA in Japan in 1985. Shiitake Mushrooms are used in Japan and China as a cancer-fighting agent. Studies have shown that Shiitakes also lower cholesterol.