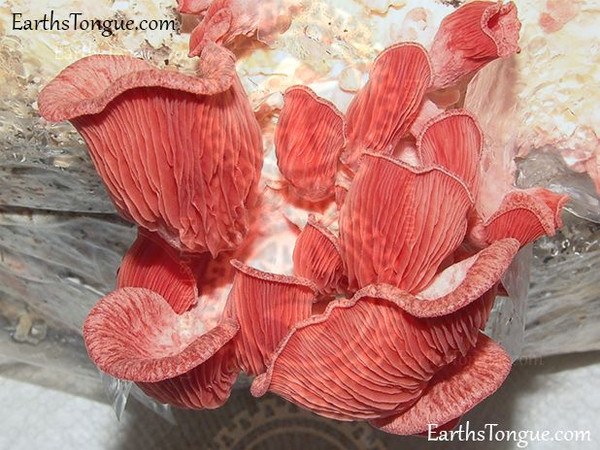 The Pink Oyster is an extremely fast colonizer and produces bright pink primordia which are darker and more colorful if grown in shade. They do require some light and do very well in bags of wood with holes cut around the bag. Usually X's carved where most of the "pins" or small primordia is forming inside the bag works best for a full thick first flush.

Once mature they tend to curve into themselves around into a tube shape. Although a plentiful harvest, the biggest harvest is always the first flush. Following flushes are usually sparse with smaller specimens with each consecutive flush.

Very rich and full of color, it even stains paper or paper towels pink after laying on them for a few hours. If left on substrate without picking at the right stage, their color will completely fade to a creamy beige with age. At this stage of loss of pigment, most of the flavor is lost and will become soft and slimy shortly after.

Pink Oysters are very hard to print and to get spores from them, you usually need to use a Q-tip on the gills and then swab a petri-dish to get a good culture. We've been able to get good prints from every other oyster except this one. Although it could be this strain specific because P. Djamor species is possible to print.

These oysters gobble just about any substrate you put them on, similar to other Pleurotus. They can grow well on straw, paper, wood, grains, etc. Colonizes fast and also is a very fast fruiter once fully colonized. We have had every petri dish produce pink primordia in the dish within days of colonization. Very aggresive.

This species is so aggressive it is know to colonize unpasteurized bulk substrates before competitors can flourish.

Their natural habitat is usually tropical and subtropical hardwoods including palms, rubber trees, and also found on bamboo.