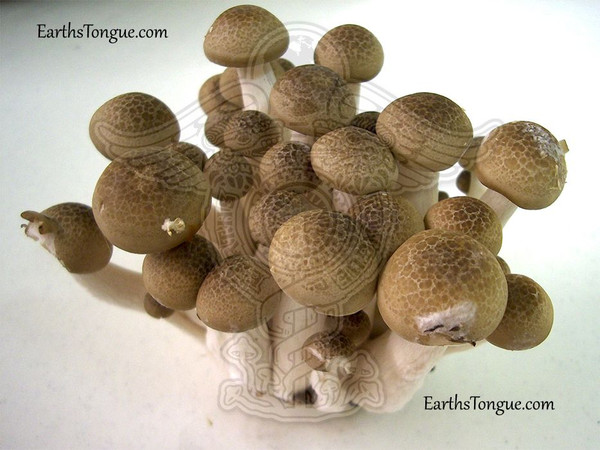 The general term "Shimeji" refers to about 20 species of mushrooms which contributes to a great deal of confusion among both mycologists (mushroom scientists) and chefs. The hon-shimeji is referred to as the true shimeji and is highly esteemed in Japan where cultivation techniques were first developed. In nature, hon-shimeji grows on wood, often on beech trees hence the common name Beech Mushroom.

Beech are usually cultivated inside plastic or glass liter or 2 liter containers and bottles with a smaller opening at the top which is simply left open to promote the stimulation of primordia production and allows for enough humidity to be kept inside the substrate but enough oxygen and light to enter the opening to produce the mushrooms. Mushrooms grown this way will elongate passed the opening and form dark brown sometimes often black looking caps which then "crack" open and leave that pattern of the cap as it gets larger. The cap color will also lighten a bit with age. The pattern left on the cap at full maturity (flat) resembles the movement of clear water at very shallow end of a clean crisp sandy beach. Unsure if that has anything to do with the name "Beech" but it definitely looks like one.