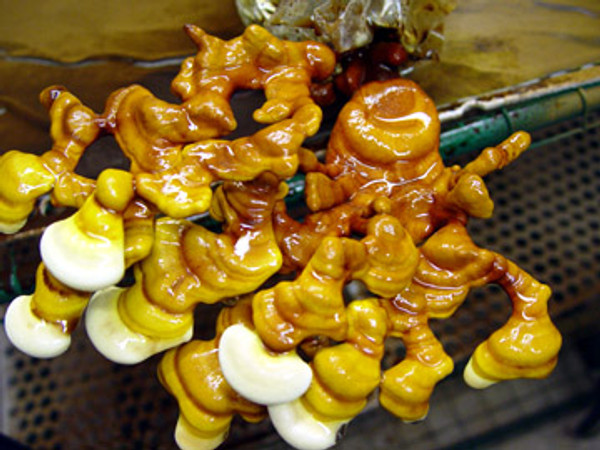 "Reishi Mushroom: Reishi Mushroom is one of the most valued plants in the Chinese pharmacopoeia. It has been used for over thousands of years as a miraculous remedy for a variety of diseases from traumatic wounds, inflammation, various ulcers to the treatment of cancer.

Reishi mushroom extracts have been shown to exert many beneficial effects which seems to support Reishi historical use as an "adaptagen". An adeptogen is defined as a substance which increases the resistance to stress and improves the general tone of the body and mind. In addition to its anti-cancer and immune enhancing properties, Reishi has been shown to exert:

Reishi is a hard and bitter mushroom. Reishi Mushrooms are polypore mushrooms. They are used strictly for medicinal purposes.

The major components of Reishi Mushrooms have proven to be a significant anti-inflammatory and inhibit malignant tumor growth. It's glycosides and polysaccharides promise to be a new type of carcinostatic agent which would be helpful in immunotherapy. This mushroom contains other substances, as well, which reduce blood pressure, cholesterol, and blood sugar levels. It has shown remarkable efficacy in reducing allergies and protecting the liver. The powder inside the spores of the fungus Reishi, which are formed as the Reishi matures contains high quality protein, with all 18 essential amino acids included. It has a combination of natural vitamins and critical trace elements essential for the functioning of the immune system.

Known as Ling Chi by the Chinese, it is perhaps the most well renowned of all the medicinal fungi, reputed to have many health stimulating properties. Emperor Shih Huang Ti (259-210BC), famous for his Great Wall, is said to have dispatched 3000 soldiers to search for this valued mushroom, also called "Elixir of Immortality". Reishi has always been considered the highest class of tonics among the traditional Chinese and Japanese herbology, promoting longevity.

The way one custom drinks tea of reishi as a medicinal drink goes as follows. On a night on which the full moon falls. You use dried up reishi and you put it to a boil and squish it against the pot many times until most of the stuff has been axtracted. Just like you would make tea of something else. Bring it down to only enough liquid to be concentrated into however many cups you will need for the amount of people drinking it. Around 2-5 grams per person.
When done boiling you pour the glasses and take the cups outside sitting underneath the full moon light shining on it all night.
In the morning, everyone drinks their tea.
According to people we spoke with. The effects were wonderful.

At the moment we are offering reishi in syringe form. 20cc