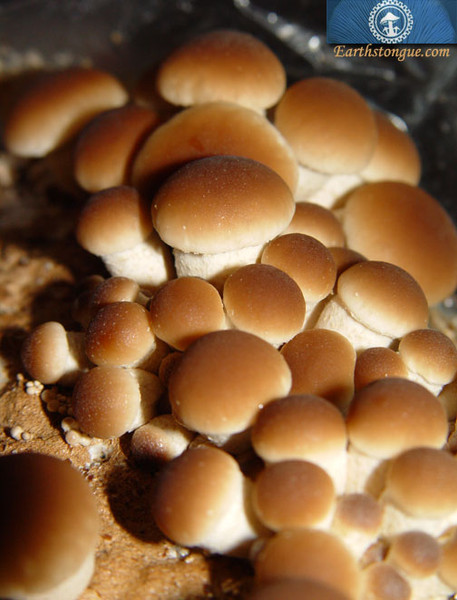 An abundant growing large mushroom, robust caps and stems and very live colored caps with hues of brown and skin colored tones. Very agressive colonizer that can overtake stumps easily. Can be used as spawn to colonize back yards and old tree stumps. One of my favorite mushrooms in looks and taste. Do not let caps grow past the mid point for best taste.

Agrocybe aegerita, a bark mulch- and wood-colonizing basidiomycete, was found to produce a peroxidase (AaP) that oxidizes aryl alcohols, such as veratryl and benzyl alcohols, into the corresponding aldehydes and then into benzoic acids . The enzyme also catalyzed the oxidation of typical peroxidase substrates, such as 2,6-dimethoxyphenol (DMP) or 2,2'-azinobis-(3-ethylbenzothiazoline-6-sulfonate) (ABTS) . A . aegerita peroxidase production depended on the concentration of organic nitrogen in the medium, and highest enzyme levels were detected in the presence of soybean meal . Two fractions of the enzyme, AaP I and AaP II, which had identical molecular masses (46 kDa) and isoelectric points of 4.6 to 5.4 and 4.9 to 5.6, respectively (corresponding to six different isoforms), were identified after several steps of purification, including anion- and cation-exchange chromatography . The optimum pH for the oxidation of aryl alcohols was found to be around 7, and the enzyme required relatively high concentrations of H2O2 (2 mM) for optimum activity . The apparent Km values for ABTS, DMP, benzyl alcohol, veratryl alcohol, and H2O2 were 37, 298, 1,001, 2,367 and 1,313 µM, respectively . The N-terminal amino acid sequences of the main AaP II spots blotted after two-dimensional gel electrophoresis were almost identical and exhibited almost no homology to the sequences of other peroxidases from basidiomycetes, but they shared the first three amino acids, as well as two additional amino acids, with the heme chloroperoxidase (CPO) from the ascomycete Caldariomyces fumago . This finding is consistent with the fact that AaP halogenates monochlorodimedone, the specific substrate of CPO . The existence of haloperoxidases in basidiomycetous fungi may be of general significance for the natural formation of chlorinated organic compounds in forest soils .